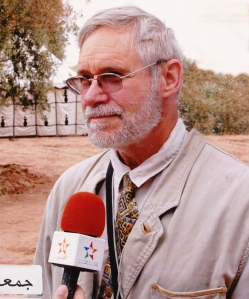 Ronald A. Messier is Professor Emeritus in History at Middle Tennessee State University (MTSU) where he taught Islamic history and historical archaeology from 1972 to 2004.  From 1992 to 2004, he was also adjunct professor at Vanderbilt University, and full time Senior Lecturer from 2004 to 2008.  He received his MA and Ph.D. degrees from the University of Michigan. Ron’s teaching and research focus on Islam and the history and archaeology of the Middle East and North Africa.  From 1987 to 1998, he directed the excavation of the ancient city of Sijilmasa in Morocco, famous for its gold trade and its contacts with Timbuktu. He is currently co-directing, with Dr. Abdallah Fili, an archaeology project at Aghmat, near Marrakech, Morocco.  Ron’s books include: The Almoravids and the Meanings of Jihad;  Jesus, One Man Two Faiths: a Dialogue between Christians and Muslims;  Sijilmasa, the Last Civilized Place, co-authored with Dr. James Miller, and The Mapmaker and the Pope. For a more complete listing of his publications and activities, click on his vita.